Modified 9-Feb-14
Created 9-Feb-14
15 photos
Halsey Valley is a small hamlet in Tioga County, NY, smack in the middle between the villages of Tioga and Spencer. The area belongs to the so-called Southern Tier of New York State, an area with few privileges these days, and few opportunities compared to, say, the Capital Region or "downstate". It's fertile countryside, though, good farmland, and has been settled for a while, mostly it would appear by Finnish immigrants.

I passed through Halsey Valley one day at dusk and was struck by it's "ghost town" appearance. Many of the residencies are old, torn, bent, abandoned. Wayne Wirtanen, who grew up there in the 1940s and beyond, only recently described the hamlet with these words: "Beautiful downtown Halsey Valley had a dozen or so houses and a few farms in and around the "city limits". Well, regrettably, as these photographs of "downtown" Halsey Valley show, there is little beauty left. The damage may be due to neglect, or it may have occurred when superstorm Lee tore through the regions in 2011, but it doesn't seem sudden, more like a long-term decay and decline in property values and interest in the area's livelihood as such. Mr. Wirtanen's recollections of "Life on the Farm in Halsey Valley in the 1940s" (first published in 2003, revised 2010) are well worth reading, as it gives specificity and focus to life in a (now very rare) coherent Finnish community. One member of that community, a young woman by the name of Greta (maiden name Konen or Kukkonen), coincidentally married no other than the film star Gregory Peck, and would be known thereafter throughout Hollywood as Greta Peck. Mrs. Peck passed away in Beverly Hills in 2008.

Photographs taken in completely unflattering conditions at the beginning of February 2014. Leica M9 with Zeiss 28mm Biogon. Processing in Lightroom 5.3. 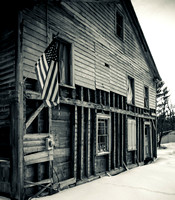